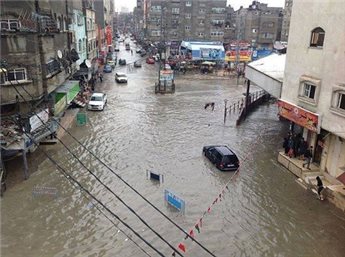 BETHLEHEM (Ma’an) — UNRWA spokesperson Chris Gunness said that large regions of the Gaza Strip are a “disaster area” and called on the world community to lift the Israeli blockade in order to allow recovery efforts to proceed, in a statement sent to Ma’an.

“Large swathes of northern Gaza are a disaster area with water as far as the eye can see. Areas around Jabalia have become a massive lake with two meter high waters engulfing homes and stranding thousands,” the statement read.

“Four thousand UNRWA workers are battling the floods and have evacuated hundreds of families to UNRWA facilities. Our sanitation, manintenance workers, social workers and medical staff have been working through the night and round the clock to assist the most vulnerable, the old, the sick, children and women,” the statement continued.

“We have distributed five thousand of litres of fuel to local pumping stations, but the situation is dire and with the flood waters rising, the risk of water borne disease can only increase. This is a terrible situation which can only get worse before it gets better,” it added, referring to major fuel shortages across the Gaza Strip that have dramatically worsened in the last few months.

Gunness also highlighted the need for an end to the blockade of the Gaza Strip in order to allow the region recover from the current crisis.

“When all this is over, the world community needs to bring effective pressure to end the blockade of Gaza,” he said.

“Any normal community would struggle to recover from this disaster. But a community that has been subjected to one of the longest blockades in human history, whose public health system has been destroyed and where the risk of disease was already rife, must be freed from these man made constraints to deal with the impact of a natural calamity such as this,” the statement continued.

“And of course it is the most vulnerable, the women and children, the elderly who wil pay the highest price of failure to end the blockade.”

The Gaza Strip is currently under a state of emergency due to severe weather conditions caused by a historic storm front moving south across the Levant.

Fuel shortages have caused daily life in the Gaza Strip to grind slowly to a halt since early November, as power plants and water pumps are forced to shut down, cutting off access to basic necessities for Gaza residents.

The Gaza Strip has been without a functioning power plant since the beginning of November, when the plant ran out of diesel fuel as a result of the tightening of a seven-year-long blockade imposed on the territory by Israel with Egyptian support.

The plant itself was only reopened last year after it was targeted by an Israeli airstrike in the 2006 assault on the Strip. The power plant generates around 30 percent of the Gaza Strip’s electricity supply, while the rest comes from Israel and Egypt.

Until July of this year, the tunnels to Egypt provided a vital lifeline for the territory amidst the otherwise crippling Israeli blockade. The blockade has been in place since 2006, and it has limited imports and exports and led to a major economic decline and wide-reaching humanitarian crisis.

In the last year, however, the situation had greatly improved, as the tunnels to Egypt witnessed a brisk trade following the Egyptian Revolution.

Gaza Strip energy officials have blamed Egypt for destroying numerous tunnels linking the Gaza Strip and Egypt in recent months. They also blamed the Fatah-led Palestinian Authority for charging taxes on fuel too high for Gaza Strip authorities to afford.