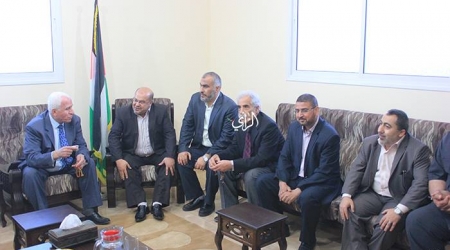 PLO officials shortly after their arrival in Gaza

A five-member delegation commissioned by Palestinian President Mahmoud Abbas arrived in Gaza on Tuesday evening to discuss reconciliation with Hamas.

The delegation entered Gaza through the Erez crossing at Beit Hanoun headed by Azzam al-Ahmad, the Fatah movement leader in charge of the reconciliation file.

The Abbas-delegated officials will be received by Gaza Prime Minister Ismail Haniyeh at his home.

The aim of the visit is to hold meetings with Hamas officials to develop mechanisms to implement the reconciliation agreements previously signed with Fatah in Doha and Cairo. These agreements encompassed intentions to establish a national unity government, to hold elections, to review the Palestinian Liberation Organisation (PLO), and to resolve civil and administrative problems resulting from the division.

Prime Minister Ismail Haniyeh is expected to deliver a speech after his meeting with the delegation today at his home in the al-Shati refugee camp west of Gaza City.