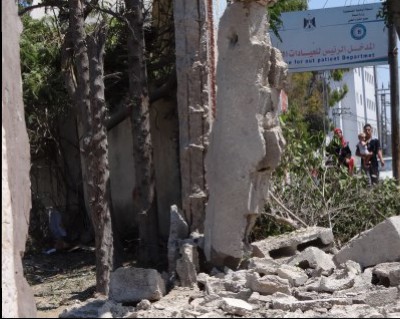 The Ministry of Health Gaza is pained to express its deep sadness and outrage at the Israeli attacks on Gaza on our holy days of Eid al-Fitr.

Particularly distressing was the death in Al Bureij refugee camp of Diana Abu Jaber and her unborn baby only a week before his estimated date of delivery.

Diana’s home was struck by an F-16 airstrike.

“As it collapsed a concrete pillar fell on her,” reported Dr Kamal Khatab, Medical Superintendent of Al Aqsa Hospital. “A shell ripped her abdomen open, the unborn baby fell out and was hit in the head with shrapnel, and his brain matter was extruded. Both mother and baby died immediately.”

Dr Khatab added that Diana, in her mid-twenties, was one of 19 members of the same family to die in that airstrike, and there are still other family members missing.

Shifa Hospital Attacked
The entrance to the Outpatient Clinic of Shifa Hospital in Gaza city was shelled yesterday afternoon, bringing the number of attacks on medical facilities to 34. Windows in the Medical Library were shattered, an exterior wall was partially destroyed, and several trees were severely damaged. It is pure good fortune that none of the displaced people sheltering in the outpatients area, or staff working in the library, were killed or injured.

“There is a deliberate strategy of attacking to kill Palestinians in two ways – one in their homes with bombs and bullets, and the other by depriving them of essential medical services,” observed Deputy Minister of Health Dr Yousef Abu Alrish.

Power plant fuel tanks destroyed
Israeli airstrikes before dawn on the sole Gaza power plant destroyed fuel tanks, and put the plant out of production. This will have an immense impact on the provision of services in Gaza’s hospitals, and significantly contribute to a looming humanitarian disaster in the Gaza Strip.

The Ministry of Health Gaza calls on the United Nations, the international community, human rights organisations, and all people of good conscience wherever they may be to act immediately to stop the genocide in Gaza.

In the words of Bishop Desmond Tutu, “If you are neutral in situations of injustice, you have chosen the side of the oppressor.”