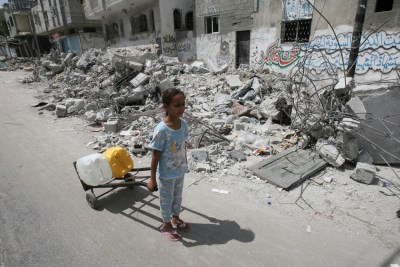 On 19 July 2014 in the State of Palestine, passing the rubble of homes destroyed in an Israeli air strike, a girl uses a hand truck to transport jerrycans filled with water, in the town of Rafah in southern Gaza. Photo: UNICEF/NYHQ2014-0978/El Baba

The United Nations Human Rights Council announced today the appointment of three members to its independent Commission of Inquiry to investigate purported violations of international humanitarian and human rights laws in the Occupied Palestinian Territory, including East Jerusalem, and particularly in the Gaza Strip since the conflict began on 13 June.

The Commission aims to establish the facts and circumstances of violations and crimes perpetrated and to identify those responsible. It will also make recommendations, in particular on accountability measures, all with a view to avoiding and ending impunity and ensuring that those responsible are held accountable, and on ways to protect civilians against any further assaults.

At least 1,948 Palestinians, the majority of them civilians, have been killed in the conflict, along with 67 Israelis, according to figures cited by the UN Office for the Coordination of Humanitarian Affairs (OCHA).

In addition, some 425,000 people are seeking shelter either in UN Relief and Works Agency for Palestine Refugees in the Near East (UNRWA) facilities, government shelters or with host families.

Around 11,855 housing units in Gaza have been destroyed or severely damaged by Israeli attacks, and another 36,000 have suffered damage, according to OCHA.

The Council had decided- by a vote of 29 countries in favour, with 17 abstentions and a sole negative vote by the United States- to launch the inquiry at its emergency meeting on 23 July.

The same resolution requested that the Commission present a written report to the Human Rights Council at its session in March 2015.

Appointed to the Commission today is Ms. Alamuddin, a London-based British-Lebanese lawyer, specialising in international law and human rights. She has worked at the International Court of Justice (ICJ) and as legal adviser to the Prosecutor of the Special Tribunal for Lebanon.

Mr. Diène was the United Nations Special Rapporteur on contemporary forms of racism, xenophobia and related intolerance from 2002 to 2008. He also served as Independent Expert on the situation of human rights in Côte d’Ivoire from 2011 to 2014.

Mr Schabas, a professor of international criminal law and human rights, served on the Sierra Leone Truth and Reconciliation Commission until 2004. Mr. Schabas was also a member of the United Nations Voluntary Fund for Technical Cooperation in Human Rights.