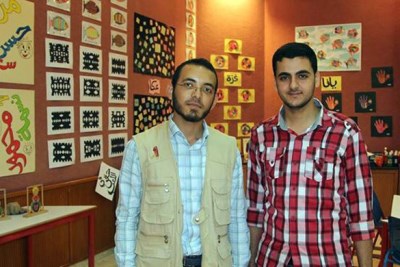 Mohammed Al Rantisi (right) with his friend and business partner Sajed (left). Their business was destroyed by five missiles from Israeli F16s.

Over 400 asylum seekers, including 100 children, were drowned in international waters on their way to Italy after the boat they were travelling on was rammed on 10 September, 2014 by people-smugglers angry because the migrants refused to transfer to a smaller boat.

As a report into the mass murder by human rights organisation EuroMid says, the travellers from the Gaza Strip, Syria, Egypt and Sudan had been promised a safe journey to Europe on a secure and comfortable ship.

One of them was our son and brother, Mohammed Al Rantisi, a 23 year old Management and Technology graduate heading to Europe in search of a brighter future. His favourite song was a message of farewell.

Mohammed wanted to complete a Masters and PhD in technology applications for business administration. He had applied to Germany, and was accepted by the Clausthal University in April this year, but Israeli authorities in Tel Aviv refused his visa application to leave.

When he told us he was going to go through the tunnels and by boat, we begged him not to go. But he was determined, because there were no employment prospects for him in Gaza, especially after the last Israeli offensive when the company that he had formed with his friend Sajed was destroyed by five Israeli F-16 rockets.

They could see no future for themselves in Gaza after this. We tried every argument we could think of, suggesting part-time work, arguing that he could not leave his family or his country, and pleading with him not to take those risks. But in his usual non-conformist way he refused to stay, reassuring us that the trip was safe and all the boats before them had arrived safely in Italy. So sadly, we watched him leave.

He went with his friend Sajed to the house of the ‘broker’ who lived in Khan Younis, and the group then went through the tunnels. A car was waiting to take them to Al Arish, where they stayed the night.

Next day they went to Alexandria, and all this time he kept in contact with us by phone, telling us about an Egyptian military checkpoint they passed through without problem, where their passports were stamped. Everything was going well, they were on schedule to get their boat on 7 September.

When they reached Alexandria they were told they would have to stay in an apartment for the night, but Mohammed refused to wait until the next day, and insisted on getting the boat called 6 September on the Saturday, which was a fatal decision. It was the death boat.

Our last call from Mohammed was at 9pm on 6 September. He called us and talked with our mum and dad and brother Yousef, and dad also talked with Sajed and asked him to take care of Mohammed and stay by his side.

The boat set off to sea, and that was the last contact we ever had with them.

The next Saturday we heard about the crime, and some of the survivors’ names were published online. We managed to get their phone numbers, and called them to find out if they knew what had happened to Mohammed and his friend Sajed. They told us that the trip was good and they were close to Italy after four days at sea. They said our son and brother was so funny and inspiring to everyone on board, and they used to call him the photographer, Abu Khaled, because he took photos of everything and everyone on the boat.

Then black Wednesday came, when the other boat hit them. They said there were six people in the boat that rammed them, and their boat capsized and everyone was thrown into the sea – women, children, young men – everyone.

At the beginning all of them were alive because they were wearing lifejackets, and they were praying, and reciting the Qu’ran and asking God to help them. They drifted all night and when dawn broke they saw that some of the women and children were dead, and floating in the water.

They told us that when the other boat struck them Sajed had been injured, so Mohammed was clinging onto him tightly.

Mohammed kept swimming for four days, day and night, they said, still clinging onto his friend who by then had become unconscious. Mohammed asked one of the guys they were swimming with to get his phone from his pocket because it had lots of photos and records on it. Mohammed became tired and fell behind the others who were rescued by a passing ship, so last they knew Mohammed and Sajed were still in the sea.

It is now two weeks since their boat was sunk, and we still have no word about what has happened to our Mohammed, or his friend Sajed.

Our mum cries every day, not knowing if Mohammed is alive or dead, worrying about whether he is lying injured somewhere with no-one to help him. One moment we accept that after this length of time he must be dead, but the next moment we think maybe a fishing boat rescued him, or he washed up on an island – after all, he is a very good swimmer.

Mohammed Al Rantisi (in blue, center), with the rest of the Al-Rantisi family in happier days

Relations and friends visit every day to give their condolences but maybe we should be celebrating his survival, not fearing his death. We just don’t know what to do, or what to believe. Until we see his body, alive or dead, we cannot have real peace of mind.

We ask the international community to do something about the conditions that drive peoples’ loved ones to go to such extremes to achieve things that people in Europe and the US and other places just take for granted – taking up a scholarship, travelling outside of your country.

We ask the international community to do something about the unscrupulous people who prey on these desperate migrants, and profit from their misery.

We ask the international community to shoulder their human responsibilities to help people in such circumstances – to search and rescue them, to search for their bodies at the very least. It pains us so much to think of our son and brother swimming desperately for days on end, holding his injured friend, while no country cared enough to even look, let alone save them. How must he have felt?

No family should have to suffer what we are going through. Please, make sure no other family does.