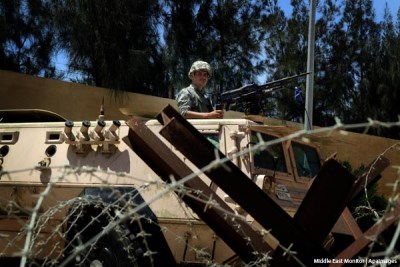 Egypt is currently blocking injured Gazans leaving the Gaza Strip, and blocking the flow of reconstruction materials to Gaza

CAIRO’S Gaza Reconstruction Conference, you ask incredulously? And well you might – after all, Egypt is currently preventing the entry of materials to complete Qatari-funded projects in Gaza addressing the destruction of previous Israeli offensives. Building of roads, housing estates and hospitals have all ground to a halt despite being underway well before the latest Israeli war crimes in Gaza – crimes which have only further increased the need.

We are seriously expected to accept Egypt as an honest broker? That the current regime has a shred of compassion for the already homeless, sick and injured Gazans still reeling from the 2008-9 and 2012 offensives who it refuses to admit assistance for, let alone those battered by the latest assaults? For the thousands of maimed and injured STILL refused exit through Rafah for necessary medical treatment elsewhere?

Egypt is the bull elephant in the china room of Gaza reconstruction.

But it is not alone.

The United States, funder and arms supplier extraordinaire to the Israeli serial killers, is also chipping in, as is Ban Ki-moon, famous for undermining the UN independent report into Israeli war crimes in 2008-9.

And let us not leave out the criminals themselves – the Israelis, who stand to profit nicely from this exercise in sleight of hand.

Unconfirmed information from the West Bank last week reports that Israeli companies have already been awarded the tenders for the supply of cement and other building materials, standing to reap billions of dollars in the process. It is difficult to imagine a clearer incentive to continue the cycle of ‘destroy and rebuild’ than to reward the criminal by paying them to repair the destruction they have wreaked, rather than make them pay for it.

Which raises the next point – why is the international community being asked to foot the bill for Israeli criminal damage? In criminal law, reparations are paid by the perpetrators of crimes, not by the onlookers (however morally bereft they may have been for failing to act to halt the murderous rampage).

And Israel’s culpability goes further than merely making good its wanton and criminal destruction of Gaza – it is the OCCUPYING POWER, and as such has full responsibility under international law for “restoring” the territory it has occupied.

“The authority of the legitimate power having in fact passed into the hands of the occupant, the latter shall take all measures in his power to restore and ensure, as far as possible, public order and safety…” says Article 43 of the Hague Regulations.

Reports that donors are threatening to withhold Gaza aid “…without fresh impetus in negotiations” exposes the dirty secret of international complicity and enabling of ongoing Israeli abuses of Palestinians.

Israel has been illegally occupying Palestinian territory for decades, built illegal settlements on stolen land, built an illegal apartheid wall, and imposed and maintained an illegal blockade on Gaza for some eight years, breaching a swathe of international laws and UN resolutions – thus exposing the manifest inadequacy of the United Nations in enforcing international law without fear or favour, if not its complete irrelevance in contemporary international affairs.

When Palestinians legitimately resist, they are killed, displaced, have their homes demolished and their country is decimated under the nose and eyes of the international community, which does nothing but launch into another round of victim-blaming ably aided and abetted by the type of response we see today in Cairo, with its emphasis on Israeli security at the expense of Palestinian security – in fact, at the expense of international law itself.

The keys to Israeli and Palestinian security – thus to the longevity of Gaza reconstruction – are in the hands of Israel and the UN: the former, by OBSERVING INTERNATIONAL LAW and withdrawing from occupied territory, leaving the illegal settlements, demolishing the apartheid wall and lifting the siege on Gaza; and the latter, by ENFORCING INTERNATIONAL LAW by holding Israel accountable for its gross abuses not only in regards to the war crimes of 2008-9, 2012, and 2014 but also the 60+ years of breaches of international law and UN Resolutions – and by insisting on the lifting of the siege of Gaza.

The solution certainly does not lie in picking up the bill, and participating in perpetuation of the siege by acting as an international version of the PA Security Services in the West Bank, thereby both acting as an Israeli proxy and lending legitimacy to an Egyptian regime whose role in denying Gazans’ rights is every bit as questionable.

Palestine has an equal right to security, and to defend itself. Which party is occupying and extending its invasion and theft of the territory of the other? THAT is the party that requires international control over its behaviour – and it is clearly not Palestine.

A Gaza reconstruction conference should be held, not in Cairo, but in GAZA – where the international community can see first-hand the destruction the USraeli military machine mercilessly meted out on innocent people and property. But perhaps that is the point – ignorance enables denial.

A Gaza reconstruction conference should be centred on holding the perpetrators accountable, making them pay for their crimes, and ensuring they cannot offend again – by keeping international and humanitarian law centre-stage, not the carnival side-show of ‘Israeli security’ or the equally-absurd victim-blaming and demonisation of Hamas.

A Gaza reconstruction conference should ensure that the criminals do not profit from their crimes, and Israeli firms should be specifically EXCLUDED from all and every tendering process and provision of goods and services in the rebuild.

And the first step in any principled and serious commitment to rebuilding Gaza must be the IMMEDIATE and UNCONDITIONAL lifting of the illegal siege.

If Israel and Egypt refuse to comply, then the Gaza seaport must be immediately opened and if necessary, military protection provided by international peacekeepers for boats entering and leaving Palestinian waters, such that Israeli and Egyptian siege-based attempts to control Palestinians’ enjoyment of their rights to trade and freedom of movement are rendered impotent.

Unless the Gaza Reconstruction Conference delivers Gaza from the siege, holds Israel accountable for its crimes against international and humanitarian law and ensures it does not profit from them, the international community will merely be enabling ongoing Israeli abuse in the best traditions of the dysfunctional incestuous family.

This entry was posted on October 12, 2014 by Julie Webb-Pullman. It was filed under Egypt, Gaza, Israeli Attacks, Siege and was tagged with Cairo, Gaza, Israeli Offensives, Reconstruction Conference, Siege.