Text of the Palestinian Reconciliation Agreement 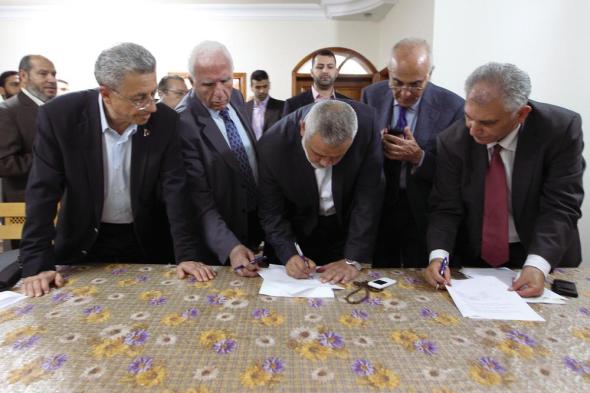 Statement issued following the meeting between the Palestinian Liberation Organization’s delegation and the Hamas movement to end the division and implement National Reconciliation.

In the name of God the Merciful

“Hold on to God and be not divided among yourselves”

At a time when the attack on the Palestinian cause is growing, at all levels; and at a time of increasing attacks on Al-Aqsa Mosque, the first Qibla and the site of the Misra of the Prophet, peace be upon Him; and as operations to Judaize the occupied city of Jerusalem and eliminate its Arab identity intensify; and as our Islamic and Christian holy sites are desecrated; and as settlements penetrate the steadfast territory of the West Bank; and as the occupation neglects all international agreements, treaties, pacts and norms; as its army intensifies its aggressions and surpasses all borders, and its leaders scheme against our people and leaders by means of this loathsome division; and as [the occupation’s] settlers run wild over people, trees and stones; and as our male and female prisoners are subjected to the worst forms of abuse in the occupation’s jails. END_OF_DOCUMENT_TOKEN_TO_BE_REPLACED

Although not an official actor in the process, Islamic Jihad’s backing of the Palestine reconciliation deal is seen as important for its survival.

As a non-member of the Palestinian Liberation Organisation (PLO), Palestinian resistance movement Islamic Jihad was not privy to the negotiations between the PLO and Hamas that resulted in Wednesday’s agreement to end the seven-year Fatah-Hamas split.

But as one of Palestine’s most important factions, they are crucial to the success of any deal and say they have considerable interest in participating and helping to build the future of the country. END_OF_DOCUMENT_TOKEN_TO_BE_REPLACED

Palestinian National Unity Government Announced: The Power of One

Much had been made of the so-called Palestinian political division, but how accurately does it describe the situation on the ground?

According to Hamas spokesperson Fawzi Barhoum, the division was not caused by Fatah and Hamas.

END_OF_DOCUMENT_TOKEN_TO_BE_REPLACED

PLO officials shortly after their arrival in Gaza

A five-member delegation commissioned by Palestinian President Mahmoud Abbas arrived in Gaza on Tuesday evening to discuss reconciliation with Hamas.

The delegation entered Gaza through the Erez crossing at Beit Hanoun headed by Azzam al-Ahmad, the Fatah movement leader in charge of the reconciliation file.

We will welcome to Gaza in coming days an appreciated national delegation from the West Bank. I express my happiness and I welcome it, they are in their home and among their families and brothers.

I emphasize the following: we have a firm conviction as a movement, and as the Government, of the need to end the division and achieve Palestinian reconciliation as a national necessity of vital importance to our cause and our people of all factions and groups.

We all recognise the escalation of Zionist threats to our cause and our people, the targeting of Jerusalem and Al Aqsa, the commission of other crimes against our people everywhere such as occupation, settlement construction, judaization, the blockade, killings, detentions and displacement. At the same time they are attempting to liquidate the Palestinian cause and its core components, to eliminate the rights of our people through every means and method available to them – military, security, economic, political and negotiations pressure.

Taking all of the above into account, and based on our national responsibilities, we will continue our efforts with our brothers in Fatah and with various Palestinian groups and individuals at home and abroad, in order to accelerate Palestinian reconciliation and end the split.

We emphasise our continuing commitment to all previous reconciliation agreements, particularly those of Cairo and Doha, and our commitment to work in partnership together to implement all five reconciliation files as one package – formation of a unity government, elections, the Palestine Liberation Organization, public freedoms and community reconciliation.

We are serious about meeting the aspirations of our people during the upcoming discussions, and in consolidating a real partnership for policy and decision-making based on what was signed in regard to those issues, to build a solid basis for strengthening national Palestinian unity in the face of the common enemy, and to promote our national interests.

We also reaffirm our preparedness to do what is required of us to achieve national partnership and to take joint responsibility for managing Palestinian political decision-making, and achieving consensus on an effective national strategy for struggle.

Through this, as Palestinians, we can achieve our national goals: to liberate our land from the occupation and gain true ownership of it; to return Jerusalem, Al-Aqsa and other Islamic and Christian holy places to us; to accomplish the right of return for our people; to build an independent Palestinian State; and to accomplish the release of all our prisoners from the jails of the enemy.

Welcome to the valued visitors, we hope from God they will be among us, and the efforts of our people and its factions and personalities everywhere, we aspire to reconciliation, harmony and reunification, unity of purpose, and a position of strength on the road to victory, liberation and return, God willing.