The Palestinian Human Rights Organizations Council is deeply concerned about the continued deterioration of living condition of the Palestinian civilians in the Gaza Strip as a result of Israel’s denial and negligence of its legal obligations towards civilians and its continuation of imposing collective punishment on the Gaza Strip for more than 7 years.

The council strongly condemns the ongoing closure imposed by Israel on the Gaza Strip and its serious impacts on all life aspects of Palestinian civilians. The council also renews its call upon the international community to intervene immediately to lift the closure, open all border crossings to facilitate the movement of Palestinians from and to the Gaza Strip, and ensure the freedom of trade. Thus, the council calls upon Egypt to open the Rafah Crossing, which has been closed for a month, to alleviate the suffering of Palestinians due to the Israeli practices and violations of the international humanitarian law and human rights law against the Gaza Strip population.

Israel has tightened its closure of the Gaza Strip border crossings, including Beit Hanoun “Erez” crossing for 7 years. As a result, 1.8 Palestinians have been denied their right to freedom of movement to and from the Gaza Strip. Moreover, this policy has deteriorated the conditions of thousands of Palestinians, including hundreds of patients who need advanced medical treatment which is not available in the Gaza Strip, persons who work in other countries, Palestinian families living in other countries and university students who study abroad, have not been able to travel abroad.

The Palestinian Human Rights Organizations Council reiterates that the Gaza Strip is still under the Israeli tightened closure, which is considered a form of collective punishment, and impacts severely on all life aspects of Palestinian civilians in the Gaza Strip. The council further emphasized that the Gaza Strip is part of the occupied Palestinian territory and reminds Israel as an occupying power of its obligation towards the population of the occupied territory according the international law. This includes taking all the necessary measures to facilitate the movement of people and goods. Thus, Israeli forces must end the illegal closure immediately. The international community must also pressurize the Israeli authorities to open Beit Hanoun “Erez” crossing, the sole outlet between the Gaza Strip and West Bank, including Occupied Jerusalem. This would enable the Gaza Strip civilians to move freely between the Palestinian cities and the outside world.

The Palestinian Human Rights Organizations Council, which signed this appeal, takes into consideration the situation in Egypt, but is concerned over the deterioration of humanitarian conditions in the Gaza Strip. Based on the strong ties between Egyptians and Palestinians and the historical role played by Egypt in supporting the Palestinian cause and particularly the Gaza Strip, the council further:

1. Calls upon Egypt Authorities to open the Rafah crossing, which has been closed for a month, and stop the deterioration of the conditions of the Gaza Strip population due to the total closure imposed on the Gaza Strip;

2. To take the necessary measures to ensure opening the crossing normally before the movement of the Palestinian civilians from and to the Gaza Strip and put an end to their suffering;

3. Calls upon the international community to pressurize the Israeli authorities to stop the policy of collective punishment against the population of the Gaza Strip and immediately open all border crossings to put an end to the serious deterioration of the humanitarian conditions of the civilian population; and

4. Calls upon the Israeli authorities to comply with international humanitarian law, especially the Fourth Geneva Convention, including finding a prompt solution to ensure the freedom of movement of Palestinian civilians through Beit Hanoun (Erez) crossing regularly and safely, and to establish a clear system ensuring the freedom of movement of the population of the Gaza Strip and safe passage and flow of the population’s needs through commercial crossings.

What are they doing to Rafah?

Norway, Canada, the USA, Australia and New Zealand have already done it. The United Kingdom, Germany, Greece and Italy are about to.

Activists all around the planet are today presenting Egyptian embassies and consulates with the demands of more than 12,000 people worldwide to permanently open the Rafah crossing, leave the tunnels alone, and allow travel and trade for Gazans trapped by the Israeli siege.

First off the mark was Norway, where Lene Oline Sedolfsen presented the petition to the Egyptian diplomats. Next was Ottowa, where Tyler Levitan and Hassan Husseini made the delivery. Then Washington DC, where Pam Bailey accompanied Medea Benjamin and Gael Murphy to the Egyptian consulate presented the demands to Dr. Yasser Elwy. In Sydney James Godfrey and Michael Coleman from Free Gaza Australia handed it over to consular official Ahmed Morsy, while in New Zealand Egyptian embassy official Mahmoud Zayed received it from Julie Webb-Pullman in Wellington.

James Godfrey presents the petition to Ahmed Morsy in Sydney

The petition, an initiative of the #OpenRafahBorder International Campaign, a grassroots organisation of students and activists from Gaza who deceided to do something about the suffering caused by the Rafah border closures, was accepted by all of the diplomats with courtesy and respect, and promises to forward them to their superiors in Cairo.

The activists reported the diplomats also made the same points:
• While Egypt is concerned about the situation in Gaza, it is primarily an issue for Israel as the occupying power. Thus, for example, Egypt does not want to formalize or legalize the tunnels — which would let Israel off the hook, while also jeopardizing Egypt’s security.
• Egypt has a right to deal with security issues in the Sinai Peninsular. There is no policy calling for, or a desire to impose, collective punishment. Its restrictions on traffic in and out of Rafah come only when there is terrorist activity in the Sinai. Egypt must also worry about its population there, so there is an inevitable, unavoidable trade-off.
• Egypt is working to end the occupation by supporting John Kerry’s so-called “peace process.”
• Egypt feels a strong bond with the Palestinians, and always will.

While it is not surprising to hear them all singing from the same songbook, they may find themselves surprised by the increasingly loud chorus from the international community unsatisfied with their libretto.

Nothing any of the Egyptian diplomats said justifies the role of Egypt in the continued closure of Gaza, and the ongoing suffering of 1.7 million people.

“Ultimately, Rafah must be expanded to allow security without closure, as well as the movement of goods, in addition to people,” said Pam Bailey after the meeting in Washington DC.

Is this a realistic prospect?

It certainly is. Earlier this month Israel rejected a donated high-tech container scanner at the Kerem Shalom crossing that Dutch officials consider would provide a solution to Israel’s security concerns about Gazan exports.

If the Egyptians are serious about their bond with Palestinians, avoiding collective punishment, and dealing with security issues, they and the Netherlands could negotiate the scanner’s relocation to Rafah – and open the border forthwith. 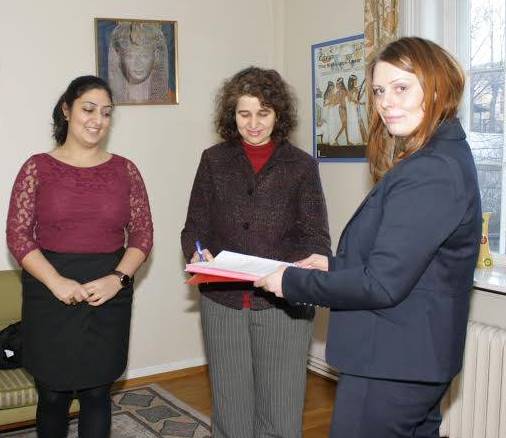 From Canada to Egypt, with love – for Gaza