The U.S envoy to the UN, Nikki Haley has repeatedly and unashamedly alleged that Hamas is using children as human shields or powder for Cannon during the great march of Return totally supported by the Palestinian people inside and outside Palestine.

Ms. Haley is only regurgitating the very words and notorious propaganda of the military spokesman of the Israeli occupation army dubbed as the Israel Massacres Army by the Israeli Journalist Gideon Levy.

Haley keeps using such cheap propaganda to encourage the Israeli occupation for commit more crimes against the Palestinian people, including children.

She has always been justifying the crimes of the Israeli Occupation Forces who are ordered to shoot to kill and shoot to maim.

Let me remind Ms. Haley that the noble goal of this Great March of Return is to peacefully and nonviolently implement our right of return to the homes and property from which we were uprooted and driven out by the Zionist groups in 1948. This right of repatriation and compensation is provided for by the UN resolution 194 Dec 11, 1948. And reinforced by the UN Resolution 3236- Nov 22, 1974 entitled the inalienable national rights including

Our right to self-determination without external interference

Our right of return

Our right to independence and sovereignty

Our right to use all methods to end the Israeli occupation of our lands.

We have been waiting for justice for the last seventy years. It is high time that our right of Return and compensation was implemented. We cannot wait any longer.

The Palestinian people ask the U.S. envoy Nikki Haley to stop using her doubled standard policy and be honest at least once in her lifetime.

We will continue our peaceful and nonviolent march of Return till we achieve our goals and realize our rights.

We can’t be overcome

International Spokesperson of the Great March of Return

The face of Zionist terrorism in Gaza

This child died today, after being shot in the face with a tear gas canister by the Israeli military at yesterday’s March of Return inside the Gaza border. 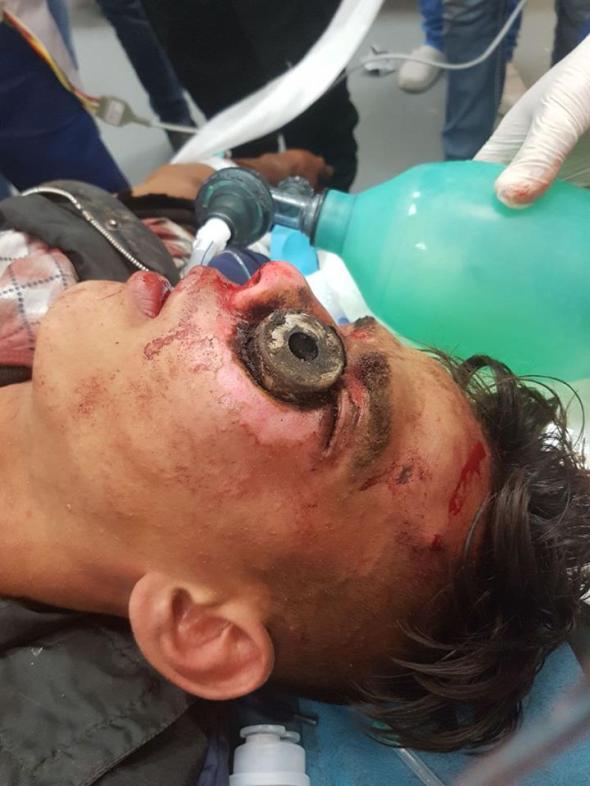 27th Anniversary: Hamas is from the Palestinian people, and for Palestine

“Hamas leaders come from the people,” senior official Dr Salah Al Bardawil told a huge crowd who took to the streets Friday in Nuseirat camp, Gaza, to celebrate 27 years since the birth of the Hamas movement.

“Hamas does not seek power or government, just Palestine’s liberation,” he said. END_OF_DOCUMENT_TOKEN_TO_BE_REPLACED

This morning I called UNRWA Headquarters for an update on the situation regarding the suspension of their services in Gaza.

I have not yet been able to confirm that food distribution will continue, if and when relief and distribution centres in Gaza will reopen – or even if they already have.

Unlikely – only two out of eight UNRWA numbers called were answered, and one was to the mobile of a person who informed me they were on leave in London.

The other, to a Public Information Officer requesting information on the current situation, received the response that they will “get back to me.”

Palestinian refugees from two of the most impoverished refugee camps in Gaza, Jabaliya and Shatti camps, today launched their own siege – of the UNRWA field office in Gaza City. Hundreds and men, women and children arrived around noon to protest at the cutting of ‘services.’

In reality, such ‘services’ are the bare essentials for survival – cooking oil, sugar, flour, rice, milk, clothing – in fact, just about everything.

As one woman pointed out, there are no jobs and they are trapped in Gaza by the siege so where else can they go to earn a living?

These are the people who were driven from their homes by Israel in 1948, and yet more in 1967. They have been living in some of the most overcrowded and unsanitary conditions on the planet ever since, in an artificially-created dependency on UNRWA handouts which are almost as difficult for them to swallow as the fact of their forced displacement.

Now, even those crumbs are being taken from them.

“We just can not survive on what they are now giving us,” one man told me. “There are 13 people living in our household. What are we to do? Where else can we get food? We can’t get jobs because there are none, we can’t leave, we can’t even grow food because Israel forces Gazans off the agricultural land to create buffer zones, and shoots us if we try to fish. They are just slowly killing us.”

As their frustration grew, some began banging on the doors and shaking the gates, using whatever was at hand – rocks, Palestinian flags – one woman even took to the door with her umbrella.

Suddenly a cheer went up – some men had climbed the gate, pulled the barbed wire away, and hoisted a Palestinian flag on the UNRWA roof, accompanied by loud applause from the crowd.

The Palestinian flag is hoist above UNRWA

Palestinian security then arrived and asked the men to get down, which they did peacefully.

They may have left, but their problems haven’t.

The United Nations cannot just divvy up a country and give it away to someone else, without shouldering the responsibility for the effects on the original indigenous inhabitants – threat to their very survival.

As Maslow identified, warmth, food and shelter are the very basics in the hierarchy of human needs.

The United Nations has the responsibility to ensure these needs are met for every Palestinian refugee and their descendants, and in accordance with its own instruments, to ensure that they live with dignity, and self-determination, until such time as the UN meets its other pressing obligations – the right of return for every single Palestinian refugee that wants to, to their own independent state – without occupation, without a siege.

Then, and only then, can UNRWA cut its services, and this time, permanently.

Land Day in Gaza: UNdo what you have done

Palestinians are running out of patience. 65 years since they were ousted from their homes and lands following Israel’s unilateral declaration of itself as a state and the end of the British ‘mandate’, and 37 years since Land Day was established, they are saying, “Enough!”

And they are saying it loud and clear, men and women, old and young. “ENOUGH!!!”

Loudest of all are the cries from Gaza, where hundreds of thousands of refugees and their descendants still languish in cramped camps lacking the barest necessities, nary a tree for kids to climb, or a space to kick a ball in – the result of replacing one occupying power, Britain, with another, Israel, and all with the tacit endorsement of the United Nations (UN) and its never-implemented partition plan, and its scores of never-enforced resolutions.

Hamas today hosted an event in Gaza City, where people from all levels of society, the Palestinian Legislative Council to camp-dwellers, vented their frustration, and their legitimate demands to return to the homes brazenly stolen from them.

Abu Hussan Dugheeesh, a Palestinian refugee, was unequivocal in his condemnation of the British role in these shameful events.

“Our memory still maintains the history of our land, and how Britain participated in giving the land of Palestinians to the Jews in the biggest armed robbery in history,” he told the crowd to loud applause.

Abu Akram Bahar, of the Palestinian Legislative Council, insisted that the right of return cannot – and will not – diminish with time.

Issam Audwan, from the Hamas Division of Refugee Affairs, made it very clear that doing nothing is not an option. With only around 22% of their lands left, and settlements expanding daily, time is running out.

“We must be united,” he said. “We should not wait for another Arab Spring, we have to move.”

This view was vehemently endorsed by Ameena Abdullah Abusalmiya, an 83 year-old woman driven out of her home in Ashkelon in 1948.

“We need action, not talk,” she insisted. “Muslims and Arabs all have an obligation. We don’t need food, we don’t need aid – Allah will give us those. We need our land. Enough! Enough!”

Gaza Ministry of Justice: the Right of Return is Inalienable.

The Palestinian Ministry of Justice today stressed the sacredness of Palestinians’ Right of Return to their stolen territories, saying that no-one has the ability to waive it, regardless of who they are.

The Ministry indicated during a press conference held at the Government Media Office on Sunday 04 November that the Right of Return is an individual and collective right held by more than six million Palestinian refugees displaced by the Israeli Occupation.

The Ministry spokesperson said, “On the 95th anniversary of the Belfour Declaration, the Palestinian people were shocked by the statements of Mahmoud Abbas, President of the Palestinian Authority, when he gave up his Right of Return.”

They added, “The Right of Return is a national, sacred, inalienable right guaranteed by International Law and the Universal Declaration of Human Rights of 10 December 1948. However long they have been deprived of their land, Palestinian refugees still have the right to return, and that right is non-negotiable, unchangeable, and has not been abdicated.”

The Ministry also highlighted that the Palestinian people have withstood the pain of the Nakbah, the ravages of Israeli aggression, and the bitterness of displacement in order to realise their rights in general, and the right to return in particular.

They said anyone who gives up the Right of Return is out of touch with reality, denying fundamental national principles, and violating the Palestinian National Accord.

The Ministry called upon the Palestinian people to continue their struggle for their legitimate rights, and called upon international, Arab, and local media and human rights organizations to expose the obnoxious racist Israeli occupation and its denial of Palestinians’ rights.