The Ministry of Health in Gaza reports the following statistics as at 1700 hours on Monday July 28, 2014.

END_OF_DOCUMENT_TOKEN_TO_BE_REPLACED 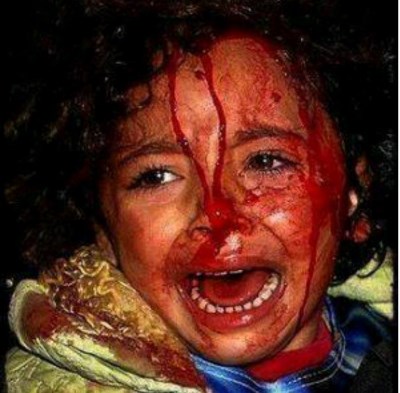 As international and criminal law scholars, human rights defenders, legal experts and individuals who firmly believe in the rule of law and in the necessity for its respect in times of peace and more so in times of war, we feel the intellectual and moral duty to denounce the grave violations, mystification and disrespect of the most basic principles of the laws of armed conflict and of the fundamental human rights of the entire Palestinian population committed during the ongoing Israeli offensive on the Gaza Strip. END_OF_DOCUMENT_TOKEN_TO_BE_REPLACED

Gaza: Between the Devils and the Deep Blue Sea

WTF? Israel carries out ANOTHER blatant act of piracy in international waters? And expects the world to believe the fiction they were headed for Gaza? A country under Israeli naval blockade for the last seven years??? Even the BB boys Bush and Blair managed better Words of Mass Deception than THAT!

Of course it is AIPAC week, so we can expect a series of attention-seeking missiles across the bows to distract the public from the spectacle of servility and sycophancy assaulting our senses from Washington. But a freaking great shipload of M302’s to go where even Gaza’s fishermen fear to row?!! I don’t think so.

Such nonsense is surpassed only by Netanyahu’s AIPAC-aired demand for Palestinian recognition of Israel as a Jewish state, which is neither part of the agreed negotiating terms nor even part of any recognised approach to international diplomacy. Does EVERY country have to recognise Israel as such? When and where can we all join the “Israel is a Jewish state” club? At the same time as we join the “Egypt and the Ukraine are democracies” clubs, perhaps?

Not only is it AIPAC week, but also Ukraine week, where the self-proclaimed government in Kiev just appointed dual Israeli-Ukranian citizen Igor Kolomoysky as governor of Dnepropetrovsk. He also happens to be the third richest man in the Ukraine, which may help overcome the difficulty of governing a Ukranian region from his home in Switzerland…

And Cairo week was also a bit of a coup, with a court managing to ban purported activities in Egypt of Palestinian political party Hamas. Who cares about legal niceties such as presenting evidence, or the right to mount a defence when you have enough kangaroos jumping around to keep all eyes off who is filling their pouches?

And Gaza week – well, that is every week. Forget the truce – that is only for the Palestinians. Israel assassinated two young men this week in a drone strike, in a blatant breach. And militants aren’t their only targets. From the scrap collector shot in the head to the middle-aged woman shot in the stomach, the football players shot in the legs and feet to end their potential careers, civilians are being killed and maimed daily. Since 20 December 2013, 55 Gazan civilians have been injured ON THEIR OWN SIDE OF THE BORDER by Israeli soldiers – 43 by live fire, 10 by rubber-coated metal bullets, and two hit in the head by canisters.

Gaza, the elephant at the so-called peace talks.

Gaza, already reeling from seven years of siege and the theft of its water by Israel, now facing certain strangulation from the south.

Gaza, the Yarmouk about to happen, but from which everyone turns away.

Gaza, bordered by the magnificent Mediterranean – but which they can barely enter. Gaza, Bordered by Egypt, whose enmity has now been slammed on the tabletop, and by Israel, whose ongoing crimes speak for themselves – to a deaf world.

Gaza, between the devils and the deep blue sea.

The Israeli air-strike that killed Al Qassam commander Ahmad Al Jaabari targeted him while he was in a car at the gates of Al Shifa Hospital in Gaza City.

There is a transport station outside Al Shifa hospital for people coming from all parts of the Gaza Strip. The gates of Shifa Hospital always have many civilians nearby, at all hours of the day and night.

This is a very clear CIVILIAN TARGET, and constitutes a CRIME AGAINST HUMANITY.