Today I went with Ministry of Agriculture reserachers, international activists and international journalists to the Gaza Buffer Zone at Juhrardeek to accompany a farmer to his fields.

AhmadHassan Badawi’s farm was attacked durin g the recent Israeli offensive, and his poultry farm destryed by shells from israeli tanks, which killed his 3,200 chickens. He is left only with his field crops, and some olive tress and flowers.

Of his 50 dunnums of land (1 dunnum = 1,000 sq m) Ahmad is only able to access 30, due to Israel declaring the rest of his land part of the buffer zone, and shooting him and his family if they try to farm it.

The slide show displays the quite large group of foreigners accompanying the researchers and farmers towards the fence, and the Israei response – this, after a caesefire agreement in which farmers are supposedly guaranteed access to their lands.

One of Ahmad’s sons has already been shot in the leg – they told us that the only difference our presence makes is that Israel uses warning shots when foreigners are present, otherwise it shoots straight at them.

At an event in Gaza City today organised by the Government Media Office to honour the journalists killed and wounded by Israel during the so-called Operation Pillar of Defence, Imad Al Franji, head of al-Quds TV, spoke on behalf of all of the shelled media offices in Gaza. 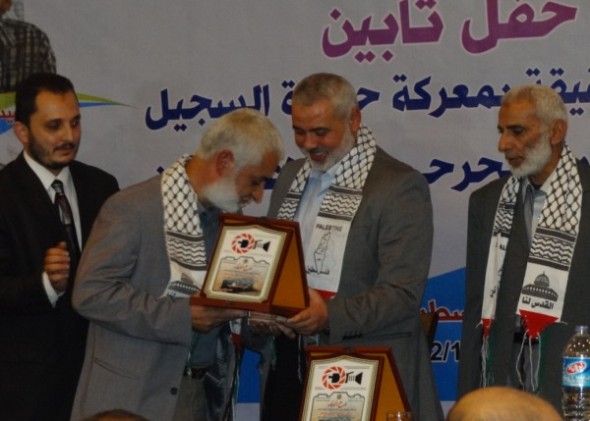 Al Franji said they will renew their demand that the International Federation of Journalists cancels Israel’s membership, and that IFJ send a delegation to Gaza to investigate Israeli crimes against the media during the recent offensive.

“Do not kill Palestinian journalists twice, once by Israeli rockets, and the second time by international silence about these crimes leaving Israel unaccountable for them,” he pleaded.

Abu Heen advised that a delegation of journalists from 40 unions in the Arab Jounalists Union will arrive in Gaza on Thursday to see the Israeli crimes with their own eyes, and assist in holding Israel to account for them.

The father of martyred journalist Hossam Salama broke down in tears as he asked the international media how they could stand by and watch as women and children were killed, and his son was burning.

Palestinian Prime Minister Ismail Haniyeh expressed his appreciation for the great work done by journalists during the eights days of Israeli attacks on Gaza.

“Dear journalists and media persons, you are heroes,” he said. “You moved around under fire and the sound of drones and F-16s to find and expose the truth.”

The Prime Minister announced a one-year exemption from licence fees for television and radio stations, in recognition of their valuable contribution to the Palestinian victory.

Ceasefire and shocking defeat for the enemy

Firstly, I would like to send warm condolences to families of the Palestinian martyrs and to the wounded. Nearly 160 Palestinian were killed including 42 children, 11 women and 18 elderly persons, and 1222 others were wounded including 431 children, 207 women and 88 elderly.

These statistics indicate that the occupation was brutal and ferocious, and its military intelligence was so deficient they didn’t know what to do. As a result they did whatever they could to inflict the maximum pain on the people of the Gaza Strip through the killing of women, children, and the elderly, journalists and other civilians.

Praise to our heroic people who presented a great example of survival, generosity and sacrifice.

Now, we are going to discuss something else.

In previous years, the Palestinian resistance was not capable of winning battles with the Israeli enemy in the manner we have witnessed today. The united Palestinian resistance have succeeded in achieving, to a considerable extent, a balance of power and deterrence that we never expected at all. Better still, the occupation forces, with all their military might including aircraft, tanks and warships failed to subdue the will of the resistance.

Today the enemy backed off, and announced that Israel is ready to implement a ceasefire in accordance with the conditions laid down by the valiant Palestinian Resistance. This time is different. Netanyahu and his ministers have raised the white flag and surrendered to the valiant Resistance. Israel contacted more than 10 regional states and Europe in order to intervene with Hamas, who convinced them to accept the truce.

Israel is asking for calm, and the Resistance is imposing the conditions in an advanced step sccoring more points in their favor. On the other hand, the Israeli Interior front is deteriorating.

The enemy (Israel) led by Netanyahu fell to its knees and bowed its head in front of the greatness and might of the Palestinian Resistance, which crossed what were considered Israel’s red lines.

This Israeli retreat establishes the methodology that Hamas seeks in the next battle of liberation.

Journalists and media professionals in this battle demonstrated heroism of the highest order. Their role in exposing the crimes of the occupation is well-known. This is what lead Israel to deliberately target and bomb media institutions, journalists and media workers. Journalists risked their lives for the truth. We highly appreciate and respect their dedication, and they deserve the highest accolades for all their work.

In addition to this, Israeli occupation forces failed once again to achieve the goals set by Israeli leader before the aggression on the Gaza Strip. The Israeli operation aims against the Gaza Strip were as follows:
1. to stop all types of rockets from the Gaza Strip. The Occupation failed and, on the contrary, they increased, surprising occupation forces.
2. to assassinate Hamas leaders, to overthrow its government, and to assassinate leaders of the resistance. Doomed to failure.
3. to eliminate weapons stores. The occupation forces failed, and rockets continued rain on them until the last minute.
4. to secure the buffer zone. Failure. The resistance continued to target border patrols using Kornet missiles.

Again, all praise to our proud steadfast Palestinian people. We wish the highest reward for our heroes and martyrs. We wish a speedy recovery for the brave wounded Palestinians. We pray to God to give strength our people.

Yasser Abu Heen, Head of Gaza Journalists Union, sent a strong message of resistance and defiance to Israel on behalf of journalists, at a Press Conference held outside the bombed Al Quds Satellite Channel in Gaza City yesterday morning.

Five Al Quds workers were injured in the explosion in the Shawa Al-Hosari Tower, and another three journalists were injured in a later attack on the al-Shorouq building housing several international media offices in addition to Al Aqsa Television studios.

In further criminal attacks on the media today, a car carrying journalists in Tal Al Hawa was hit by a rocket, killing the driver and injuring the other occupants.

Israeli tactic to foment fear, even in the media

Nothing is off-limits to the Zionist war machine – babies, families, homes of anyone from Cabinet Ministers to farmers – not even journalists.

Roaming the skies like a pack of rabid dogs, US-funded drones, F-16s and Apaches strike fear into the hearts of Gazans, whether or not they are firing rockets – their mere presence signifies that possibility.

Percussion bombs, whose sole purpose is to terrify, are a constant companion.

Palestinian journalist Sameh Habeeb on Thursday received a phone call from an Israeli soldier threatening to bomb his family home, and kill him and his family.

I also received such a call. At around 09:15 am on Thursday while drones swarmed the skies and rockets pounded the city around me, I answered the phone to a person with an American accent, who asked if it was Julie. When I answered “yes” they proceeded to call me an “Islamic-Jihad-supporting piece of shit” and told me that an Israeli drone was on its way to kill me. They asked repeatedly if I could hear it (given the situation, there was little else to hear, apart from their psychotic rantings…), and continued their vitriolic abuse and threats. I hung up, and the phone immediately rang again, this time with no number displayed. Two more calls followed that day.

That it must stoop to intimidation of the media, especially with death threats under such conditions as currently prevail in Gaza, indicates both the paucity of its justifications for its criminal offensive, and also the depths of moral depravity to which it has sunk – and correspondingly, that even Israel itself realises that despite its big guns, it cannot win the war of hearts and minds.

Like its merciless attacks on and terrorising of the citizenry of Gaza, these attacks on the media will not succeed – they only make us stronger, and even more determined to ensure that truth and justice prevail.

And like every Palestinian with a true heart and an independent mind, I will not be deterred by Zionist threats, and will continue to resist.