Will Samer Al-Issawi die in an Israeli jail, just like Maysara AbuHamdiya? Or will the international community move today, the International Day for Palestinian Prisoners, to save his life?

GAZA CITY — These are the questions today preying on the minds of 32 sick Palestinians in Israeli jails. Along with, “Which of us will be next?”

“My health has deteriorated greatly but I will continue my hunger strike until victory or martyrdom. This is my last remaining stone to throw…” Al-Issawi said in his last letter from prison.

Palestinian Ministry of Detainees and Ex-Detainees reports that as at 31 March 2013 there were 1,200 sick Palestinians prisoners inside Israeli jails, 14 of whom have cancer and 18 of whom are confined in the Ramle Prison Clinic.

Israel shows no signs of introducing minimum standards of medical care anytime soon. In a report titled The Palestinian Prisoners Hunger Strikes of 2012 Physicians For Human Rights-Israel made recommendations regarding the urgent need to transfer prison medical services from the Israeli Prison Service (IPS) to the Ministry of Health, due to the dilemmas of dual loyalty of IPS medical staff and the primacy given to political and security considerations at the expense of prisoners’ health and well-being. It is not to be.

In response to their recommendations, “…the Ministry maintained that supervision and control over the medical services of prisoners would remain under the auspices of the IPS, thereby thwarting our request…” Physicians For Human Rights-Israel stated on their website this week.

Will Al-Issawi be the 204th Palestinian to die in Israeli custody since 1967? Or will the International Day for Palestinians Prisoners spur the international community into snatching him from the jaws of death?

Who is MAD? We are! We are Media Activists for Detainees, a collective of young Gazans who are MAD about the use of administrative detention by Israeli authorities to imprison Palestinians without charge. We are MAD about the torture to which our brothers and sisters are subjected during interrogation. We are MAD about the conditions under which they are held in Israeli jails, from lack of timely and adequate medical treatment, to years of solitary confinement, rotten food, strip searches of both detainees and visiting family members, violent midnight cell-raids, random beatings, and the with-holding of family visits.

We are MAD, and we are dangerous – but only to those who with-hold basic human rights from detainees in Israeli jails – and only by exposing their abuses to the world.

Palestinian Detainees issue must not be buried with Hamdiyeh

As Palestinian detainee Maysara Abu Hamdiyeh was being buried in Hebron, the Palestinian Minister of Religious Affairs Ismail Al Radwan was denouncing his murder at the mourning tent set up in his honour in Gaza City by the Ministry for Detainees’ and Ex-Detainees’ Affairs. 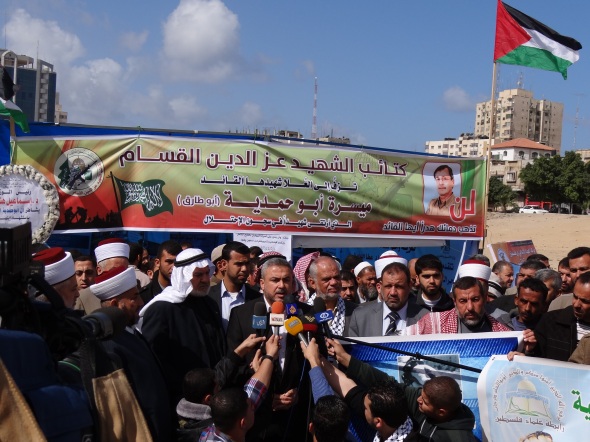 Radwan demanded that the international community form a committee to supervise Palestinian detainees in Israeli jails, to ensure they are given their basic rights.

Several hundred people gathered to add their support to the Minister’s call, amongst them Sabrin Al Baz.
“I have come here today with about 100 others from the Adawa Islamic College to show our support for Maysara Hamdiyeh,” she told me.

“All Muslims must support this issue, it is not just an issue for Palestinians, but for human rights everywhere. They belong to everyone. What do you do when someone takes something that is yours away from you?” she asked.

“You must fight to get it back. We must protect and defend our claim, as Palestinians and as Muslims. But people everywhere must also help to protect them,” she said, reiterating Minister Radwan’s call for international action. 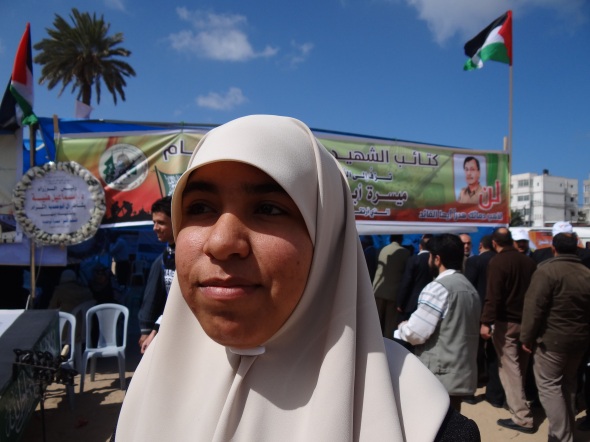 The third death of a Palestinian detainee in almost as many months demands international attention, and very close scrutiny of the conditions under which they are being held in Israeli prisons.

That even the International Committee of the Red Cross and local Israeli human rights groups cannot gain access to these prisons to monitor conditions, signals that there are likely gross abuses being hidden from public view. These deaths are compelling proof.

The international community has a moral obligation to expose these atrocities to the cold light of objective assessment, and ensure that the ongoing issue of the torture, abuse and medical negligence of this most vulnerable population is not buried along with Maysara Abu Hamdiyeh.

Palestinian Detainee Death: We are all Maysara Abu Hamdiyeh

Suffering from cancer since at least August 2012, he was not told of his diagnosis – or given any treatment other than painkillers and flu injections – until March 2013, when he was finally commenced on chemotherapy. This treatment might have had some chance of helping him if it had been administered early enough – but it did not begin until the cancer had already metastasised to his spine…then it was suspended ‘for the Jewish holidays,’ according to his lawyer Rami al-Alami.

Such blatant breaches of both medical ethics and human rights norms are both scandalous, and scandalously common.

The litany of medical neglect by Israeli Prison Services (IPS), which many ex-prisoners describe as a deliberate punitive policy by medical personnel in league with the Israeli prison authorities, is demonstrable in the 200+ prisoners who have died whilst in Israeli custody – 51 of them from medical negligence – and those who have died soon after release.

Palestinian Minister of Detainees’ and Ex-Detainees’ Affairs Dr Attallah Abu Elsebah has released numerous press statements over recent years advising of the medical negligence being suffered by more than 1000 of the 4500+ Palestinian detainees in Israeli jails. They currently include some 18 prisoners permanently resident in the Israeli Prison Service’s Medical Center (IMC) in Ramleh Prison suffering from life-threatening or malignant diseases such as heart disease, cancer, and kidney failure, and 85 disabled prisoners with mobility, mental, and sensory disabilities.

Israel’s own human rights and medical experts decry the practices of their prison authorities. Physicians for Human Rights–Israel reports that the Ramleh IMC operates with virtually no supervision, medical or otherwise, and is characterized by inadequate medical care, non-medical staff intervening in treatment, problems in transferring patients to outside institutions, neglect in cases of disability and rehabilitation, threats against patients that have filed complaints, and inadequate sanitation and living conditions. [1]

“The IPS, the main entity responsible for the custody of incarcerated persons, goes to great lengths to prevent outside inspections. The IPS does not allow open tours of its facilities, and only permits pre-coordinated visits with attorneys or doctors with individual prisoners, during which the attorney or doctors may not visit a prisoner’s cell in order to assess the conditions of incarceration,” they report on their website.

A Council for European Palestinian Relations description of the conditions for Palestinian detainees stated that health examinations are conducted through a fence, and any necessary surgery or transfer to hospital for additional medical treatment is usually postponed for long periods of time. [2]

“Demands made by Israeli organisations to provide health care to detainees have consistently been refused, in addition to petitions made by the International Committee of the Red Cross (ICRC),” they add.

Right to health care in prisons

The International Covenant on Civil and Political Rights (ICCPR) has been deemed by the Human Rights Committee to protect the rights of prisoners to health care through Article 6 guaranteeing the right to life, the Article 7 prohibition that ‘no one shall be subjected to torture or to cruel, inhuman or degrading treatment or punishment’, and Article 10 guaranteeing the right to humane treatment of prisoners. These articles have led the Committee to hold that ‘adequate’ or ‘appropriate and timely medical care must be available to all detainees.’ [3]

The Committee has also held that ‘free access to doctors’ should be guaranteed in practice, immediately after arrest and during all stages of detention. [4]

In fact the Human Rights Committee found a violation of Article 6, the right to life, in a very similar case to that of Maysara Abu Hamdiyeh. In Lanstova versus Russia, a man died in prison because of the failure of the prison authorities to take appropriate medical measures when his health dangerously deteriorated. [5]

How does Israel get away with it?

Whilst Israel has ratified the main human rights conventions, including the ICCPR, it is not a party to any of the Optional Protocols other than Children in Armed Conflicts, nor has it accepted the jurisdiction of any of the treaty body committees.

Specifically, Israel has not signed the First Optional Protocol of the ICCPR, thus complaints against Israel cannot be received by, or acted on, by the Committee.

Rogue State
How ironic that Israel is able to continue to be a member state of the United Nations, claiming all of the benefits of protection for itself under international law, while accepting none of the accompanying obligations and responsibilities towards others, particularly Palestinian detainees – and while Palestine itself cannot even achieve full recognition as a state.

One might wonder why a state that has breached over 80 UN resolutions, including the United Nations Charter itself at least 22 times, is left to continue ‘business as usual’ against Palestinian detainees –three of whom have already died this year – and is never held to account. Is the UN showing unmistakable signs of its advancing age, and heading for total impotence, and irrelevance?

Noam Chomsky has defined a rogue state as “a state that defies international laws and conventions, does not consider itself bound by the major treaties and conventions, World Court decisions — in fact, anything except the interests of its own leadership, the forces around the leadership that dominate policy.” [6]

Regardless of the impotence of the UN system to enforce international law, particularly in the face of the US power of veto that would inevitably be used should any attempt be made to oust Israel from their hallowed halls, the international community of states has no other moral choice but to act, and to act immediately, to rein in the rogue state of Israel, and force it, as they did apartheid South Africa, to act in accordance with the fundamental rights and principles that define world citizenship – mutual respect, and self-determination.

To do any less is to critically undermine not only the human rights system and its basis in universality, indivisibility, and interdependence, but also the very foundations of civilisation.

Because ultimately, we are all Maysara Abu Hamdiyeh.