In the last week much has been made of the purported failings of Mursi the President, and Mursi the politician. He tried to do too much, or did too little, he took too much power (for his party), or not enough (from the military and security services). He went too fast, or not fast enough. Some identified a failing as his lack of charisma, comparing him to “the more charismatic Khairat El-Shater” or lauding the “charismatic, chisel-jawed Sisi” – as if charisma is a substitute for principled leadership, or political legitimacy.

We need only look to the United States and to Israel to see what unprincipled leadership charisma is capable of delivering, including on electoral promises. Remember the closure of Guantanamo and the reduction of unemployment promised by US President Barack Obama, remember Israeli Prime Minister Benjamin Netanyahu’s promise to appoint former communications minister Moshe Kahlon as chairman of the Israel Lands Authority. And remember both of these leaders’ unstinting terrorism at home and abroad.

Mursi the man, by contrast, is who the majority of the Egyptian people elected in internationally-recognised free and fair elections, not for his charisma but for his humanity.

Mursi the Muslim man, who bared his chest at his inauguration to show that he was not wearing a bullet-proof vest, to demonstrate his trust and faith in the Egyptian people. Some of whom are now betraying him, and them.

Mursi the Muslim man, who in 2005 led demonstrations supporting independence for all judges. Some of whom are now betraying him, and them.

Mursi the Muslim man, who was in and out of jail under the Mubarak regime “due to his constantly firm stance” against its repressive measures and oppressive practices. The remnants of which continue to betray their people.

Mursi the Muslim man, trying to lead his country out of 30 years of corruption and an enormous public debt, by transforming the machinery of the Mubarak dictatorship into “an executive branch that represents the people’s true will and implements their public interests,” according to Islamic principles of justice, equality, tolerance, honesty, knowledge, labour, perseverance – and forgiveness.

Mursi the Muslim man, who did not seek, but was propelled to, the presidency of Egypt – by his party and by the majority of the Egyptian people. Most of whom are still behind him.

For what? For being democratically elected by the people of Egypt? What greater disincentive could there be for future presidential hopefuls… if indeed there were to be another free and fair electoral process now that Egyptian democracy has been so ignominiously usurped.

For failing to do in one year what no leader anywhere or any time has ever achieved – a 12-month complete turnaround of a decades-old corrupt and embedded system?

For dealing fairly and openly with another democratically-elected – and Islamic – political party, Hamas? The rumoured charges pending against him strongly suggest this.

For opening the Rafah border to his brothers and sisters in the besieged Gaza Strip to enable a breath of life to enter, and the foul stench of Zionist oppression to escape and turn the stomach of the world? The quick closure of the Rafah crossing, and the barely-restrained glee of the Israeli administration, equally strongly suggest this.

Mursi the Muslim man stands guilty of two things – being elected president of Egypt, and being principled.

The first was not by his choice.

The second is what it is to be a Muslim, and a man.

How should he plead?

Mahmoud Zahar on Rafah, the Free Trade Zone and more

After this morning’s event I took up the Rafah issue with another attendee, Dr Mahmoud Zahar, Hamas co-founder and politburo member. 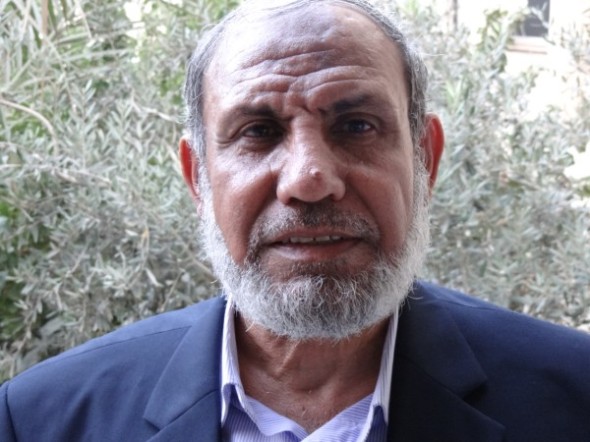 “Firstly, we need to make it clear that we appreciate and understand that President Mursi has many internal troubles, and he is concentrating on his own country’s national and global interests. Perhaps we were a bit too optimistic. The old regime is still running many things, like security, and no change is possible yet. We need to wait, and not pressure them,” he told me.

“The Free Trade Zone was not an official proposal, it was a Muslim Brotherhood project, but they started talking about it in the media.”

What about the closure of the tunnels we have been reading about, I asked. Is this going to create shortages in Gaza?

“The only tunnels being closed are those being used for illegal purposes, so we are happy about that, the ones being used to bring in drugs, weapons and for other illegal purposes. Egypt will not allow the closure of tunnels to such an extent that it causes food shortages,” he replied.

“1500 people daily are passing through Rafah now, it is open seven days a week. There are still some restrictions, though – the list of names of people banned from crossing is still reliant on Fatah information given to the old Mubarak regime, and the list has to be gone through one by one because many people have similar or the same names – sometimes even babies are banned. The names have to be confirmed, or cancelled, and many have been, but Egyptian security has other priorities than updating the lists.”

The events in Tahrir Square last Friday indicate that despite the lip-service paid to democracy, many are reluctant to accept the results, and subsequent decisions taken by majority governments. Does this suggest that the notion of democracy itself needs attention?

“We need to distinguish between the instruments or models of democracy, and its conceptualisation. In the Arab world we are moving from dictatorships to elected presidents, and building our own models will take time. We are not just adopting a US model, we are developing our own. It is not just how we choose our representatives, but also how we punish wrongdoers, how we reward people who succeed in doing well, the sort of administrations we create to enable public participation and to end corruption. President Mursi has achieved a lot of successes already. Sudan and Syria are much bigger problems for him right now than Palestine,” Dr Zahar said.

How do you see Egypt’s role in relation to Syria?

“ Egypt has a big role to play as the peacemaker in Syria, with the help of Iran and Turkey. I think the current situation between Turkey and Syria will finish. Turkey and Iran and Egypt are all seeking a political solution, and that will enable the Syrian regime to be replaced with a democratic administration. Recovery will take time.”

So the Rafah situation will not change quickly?

“We need to speak to the people around the President, he is surrounded by groups from the old regime who don’t understand, or don’t want to change. We need to wait.”