As the United States and the United Kingdom sing from Israel’s songbook, the Arab world is again rising up in protest – this time at the Israeli crimes against humanity again being perpetrated against Palestinians – and anyone else who has remained – in Gaza.

Mainstream media tries to bury the truth of the sequence of events and who is to blame, most shamelessly the BBC, who did not even report the civilian deaths of the son and sister-in-law of one of their own staffers, leaving it to the Washington Post to cover – far enough away, they probably hoped, that few UK readers would see it. But that didn’t stop the Washington Post squealing in the chorus.

Despite their best attempts to entomb the truth, the people of the world have also risen up in support of Gaza, and Palestine. 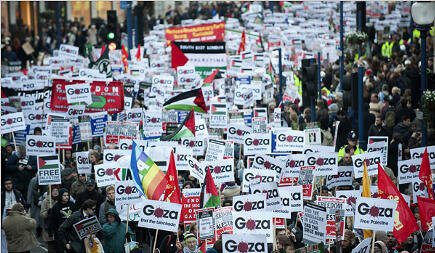 Protest in London against Israel’s massacre in Gaza

Israel – and its silly songsters – may find that this time they are way off key.

As Palestinian Prime Minister Ismail Haniyeh said in his first address to the nation since the assassination of Ahmad al-Jaabari, Palestinians “will remain faithful to our martyrs’ noble blood.”

“It is only the beginning of our journey,” he warned.

“Armed with our faith, we are confident in our resistance fighters standing in defiance. Palestinians in Gaza, the West Bank, Jerusalem, the Territories of 1948 – it is your battle, your own people, blood, and dignity,” he said in a clear call for unity.

“Yes, we rise in revolt. I hail the unity and united action taken by all factions, we are one people, one front.”

Haniyeh said the Government embraces the Palestinian people, and thanked them for their steadfastness. He also praised the resistance, “our victorious defiant brigades” who remain defending the nation on all fronts.

“We appreciate their fortitude in the face of death and of this ferocious assault. I kiss your hands, our noble fighters.”

The Prime Minister extended appreciation to “all free men and women in the Arab world revolting in our support until this belligerent aggression comes to an end.”

Already standing alongside Gaza are Egypt, Tunisia, Sudan, Lebanon, Turkey, and Qatar – and after Saturday, we can expect even more.

Netanyahu may well have tripped over his own red line, wrapped it around his neck and that of his tone-deaf twins – and strangled his own finale.

Haniyeh thanks Qatar, pledges to liberate all of Palestine

At an event in Gaza City today to honour former ministers and departmental heads, Prime Minister Ismail Haniyeh said that the Strip’s Hamas-led government was the first in the region to face the transformation from running an Islamic organisation to running a state, an authority and a people. 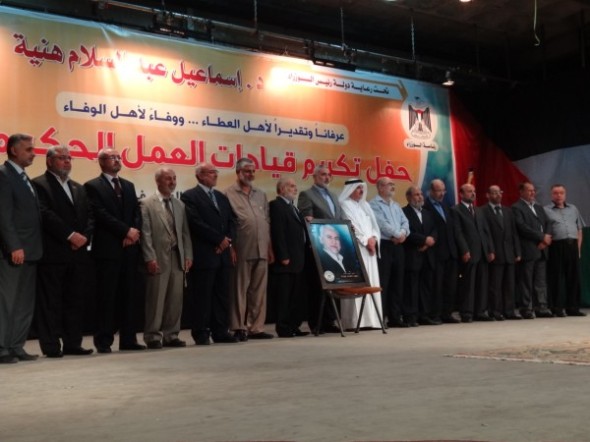 “It was the first experiment in Islamist rule in the region, and sparked a revolutionary surge in Islamist rule,” he said, referring to the democratic election of Islamic-dominated parliaments in Egypt, Morocco and elsewhere. 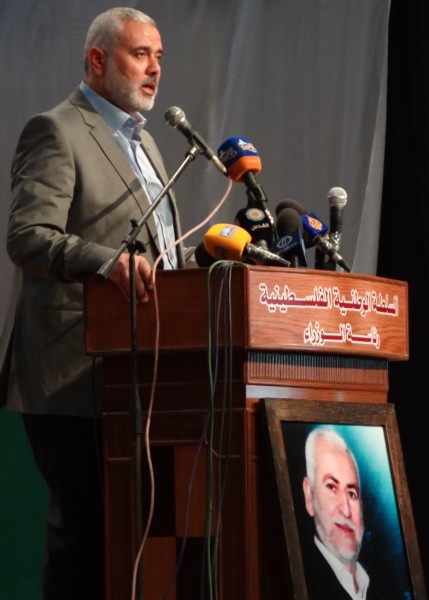 Haniyeh emphasised that the Hamas government is determined to liberate all of Palestine, not just parts of it, and is working to reconcile with Fatah to achieve this. He denied they had any plans for Gaza to be an independent entity.

Along with others addressing the gathering, such as the First Deputy Speaker of the Palestinian Legislative Council Ahmad Bahar, Haniyeh expressed praise and gratitude to Qatar for its pledge of more than $200 million for the reconstruction of infrastructure and homes in the Gaza Strip destroyed by Israeli forces during Operation Cast Lead.

Bahar also turned his attention to Egypt, urging its government to open the Rafah crossing for goods as well as people.