Although a few days have passed, the ripples of the weekend are still roughing the surface of our lives, the effects still sifting down into the depths.

You can hear it in the manic laughter of the children as they set off their Ramadan fireworks each evening, feel it in the fright that follows every bang and burst of sparks.

You can almost touch the tension in the public cars on the way to work, the endless overheard conversations about when it will resume – not if.

You can see it in the wearied faces of the hospital workers, whose bloodied weekend still stares from their eyes while they carry on keeping on, and on, and on…

You can smell it in the way everything is heightened; the sharpness of the onions cooking for the Ramadan falafel filling, the must of the natural gas that is propelling the car, the fragrant oil on the man returning from the Mosque, the strawberries fresh from the fields of Beit Lahia, the stench of the garbage.

You can taste it in every mouthful at Iftar; the sweet relief of that first date, the soothing of those first sips of water, the comfort of the bread dipped in hummous, the tang of the rocket leaves, the crunch of the sambousek, the qatayef finale.

It does not consume us – we consume it.

In Gaza we live

Yesterday I went shopping. Like billions of people throughout the world, I went to the market to buy fruit and vegetables. Like a fraction of a percent of them, I did so beneath falling bombs.

Because I was shopping in Gaza.

We live despite media misinformation that paints Israel as the victim – a media that harms us every bit as much as every Israeli missile.

We live in the face of the lie of Israeli self-defense, of Israeli “response to rocket fire” – which ignores the root cause planted, watered and fertilized by Israeli snipers last Friday, when they shot dead Palestinian teenager Raed Khalil Abu Tair, on crutches and hundreds of meters away from the fence.

THAT was the seed from which this situation grew. And it is a seed that feeds our defiance, resistance, and our very will to live in Gaza.

I went shopping to Saha market, and between the blasts I bought a pair of sandals, and a sunhat each for my friend’s daughters. Yes, I jumped with each bomb – then continued with what I was doing – getting on with LIFE.

I bought fruit and vegetables – eggplant, capsicum, potatoes, tomatoes, onions – ordinary, and life-giving. Oranges and kiwifruit – vitamin-packed jewels to add a sparkle no drone can dim.

I went next to the Curiosity Shop to see if he had a traditional Ramadan lamp – he didn’t.

I jumped in a car and went to Jundy; a missile struck behind us, the people in the car craned to see, people in the street all hurried towards it. I got out of the car and went into a dress shop, looking for something light to wear inside for summer.

I went to the supermarket, bought dates, water, tomato paste. I got home, put on a load of laundry because there was electricity, and unpacked the shopping.

I began preparing the vegetables for dinner.

There was a massive explosion; I went to the balcony, and saw palls of smoke rising from behind the supermarket – and realized I had forgotten to get coffee.

I will have to go and get some tomorrow.

It may seem such a basic tenet of international law that it does not need repeating, but clearly the Israelis are slow learners.

So here we go again with yet another lesson in fundamental international law:

First, Gaza is OCCUPIED. The very fact that the Israeli occupation authorities control the land and sea borders and the airspace, and are in a position to determine who can enter the occupied territory, fatally undermines their position that there is no occupation.

Second, a state cannot simultaneously exercise control over territory it occupies, and militarily attack that territory on the claim that it is ‘foreign’ and poses a national security threat. To do so, the Israeli occupation authorities are effectively asserting rights of colonial domination that simply do not exist under international law.

However, military or belligerent occupation IS a status recognised by international law – and has accompanying obligations.

An occupying power is responsible for the welfare of the population under its control. The Fourth Geneva Convention imposes obligations on an occupying power in relation to the inhabitants of the occupied territory, who are entitled to special protection and humane treatment. Among other things, the rules prohibit the occupying power from “wilfully killing” or “ill-treating” protected persons.

War Crimes are defined as:

a) Grave breaches of the Geneva Conventions of 12 August 1949…
b) Other serious violations of the laws and customs applicable in international armed conflict, within the established framework of international law….

The actions of the Israeli occupation authorities in conducting military offensive actions against the protected persons of the occupied territory of Gaza therefore are not, and cannot possibly be construed as, self-defence.

But they certainly meet the criteria for grave breaches of the Geneva Conventions, thus constitute WAR CRIMES.

So please, Israeli apologists – enough of the ‘self-defence’ excuses – they just do not hold any legal water.

Four Palestinians have been killed and over two hundred injured by Israeli military attacks inside Gaza today in an attack on civilians that has rocked the Strip.

Condemning the attacks on protesters of the Great March of Return as war crimes, the Deputy Minister of Health Dr.Yousef Abu Alrish is calling for an immediate international response.

“These blatant war crimes must stop. Our hospitals are already reeling under the strain of trying to treat thousands of innocent victims of the last four months with few resources,” he said.

“The international community must act now to prevent a complete bloodbath, and collapse of the health sector.”

The closure of the crossings this week and resulting reduction in medicines and supplies has left Gaza’s already-struggling hospitals in a critical situation, he said. 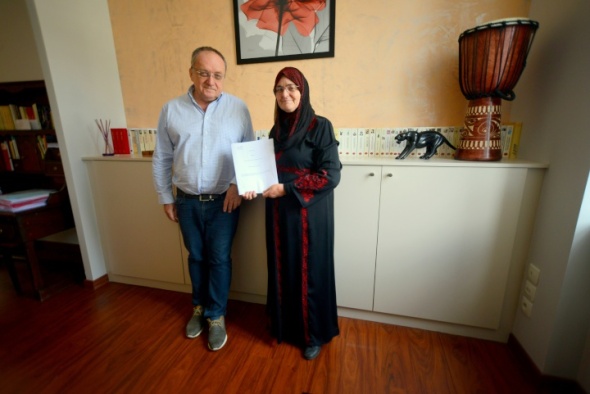 As diplomatic condemnations of the Gaza Massacre death toll from last Monday continue to echo around the world, an International Criminal Court investigation into war crimes committed by Israeli Defence Force snipers against Palestinian prostesters is looking increasingly possible. Scoop’s Alastair Thompson reports from France on the timely laying of a complaint by 562 victims and families of those killed and injured in the Great March of Return.

“Human rights no longer treated as a priority, but as a pariah,” Zeid tells 25th anniversary gathering in Vienna

UN Office of the High Commissioner

Vienna (22 May 2018) – In a speech delivered Tuesday at an international conference marking the 25th anniversary of a landmark human rights declaration, UN High Commissioner for Human Rights Zeid Ra’ad Al Hussein issued a stark warning that the world in general, including Europe, is back-sliding on human rights.

The Vienna Declaration and Programme of Action, adopted by consensus on 25 June 1993, and heavily influenced by the atrocities occurring just across Austria’s border with the former Yugoslavia, laid down the blueprint for human rights in the post-Cold-War era. It also set in motion the establishment of the UN Human Rights Office that Zeid now heads.

“This anniversary could be the occasion for a polite celebration of the achievements of my Office over the past two and a half decades – and they are many,” Zeid told the delegates gathered in Vienna. “But today is not a time for soporific complacency. Human rights are sorely under pressure around the world – no longer a priority: a pariah. The legitimacy of human rights principles is attacked. The practice of human rights norms is in retreat. Here in Europe, ethno-populist parties are in the ascendant in many countries – fuelling hatred and scarring their societies with deepening divisions.”

Referring to Austria, the High Commissioner added “In this country – which more than most should be aware of the dangers of ethnically divisive rhetoric… – false and incendiary statements have been made which are fundamentally at odds with the Vienna Declaration.”

The full text of his 870-word statement can be read below: END_OF_DOCUMENT_TOKEN_TO_BE_REPLACED

GENEVA (15 May 2018) – A UN human rights expert has called on the Israeli Government to immediately cease its lethal assault against protesters at the Gaza fence, who appear to pose no credible threat to Israeli military forces on the Israeli side of the fence.

Michael Lynk, the Special Rapporteur on the situation of human rights in the Palestinian territory occupied since 1967, condemned Israel’s excessive use of force towards largely unarmed demonstrators at the Gaza fence on Monday, which has left 58 Palestinians dead, and almost 2,800 wounded. He expressed grave fears this figure could rise sharply in coming days unless Israeli authorities uphold their obligations under international human rights law and international humanitarian law.

“This blatant excessive use of force by Israel – an eye for an eyelash – must end, and there must be true accountability for those in military and political command who have ordered or allowed this force to be once again employed at the Gaza fence,” he said. END_OF_DOCUMENT_TOKEN_TO_BE_REPLACED

Gaza has put out an urgent call for medical equipment to cope with the numbers of injured in yesterday’s massacre by Israeli forces.

The sheer numbers will put a strain on services for weeks and months to come.

If you can help, please contact the Director of the Gaza Ministry of Health International Cooperation Directorate to get instructions on how to donate: 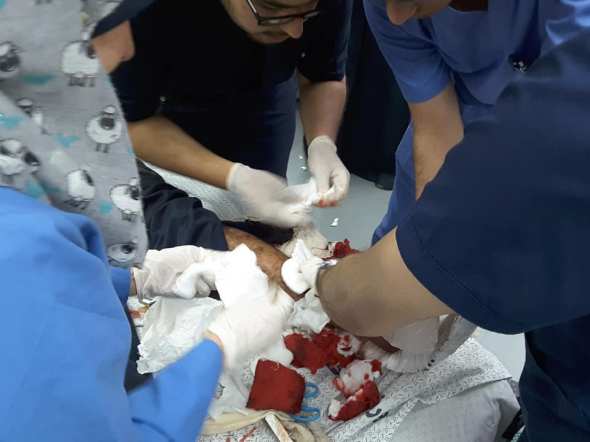 Hamas political bureau member, Khalil al-Hayya, said that the patience of resistance factions, especially the al-Qassam Brigades, is running out and a retaliation is imminent following the massacre of Gazan civilians by the Israeli Occupation on Monday. 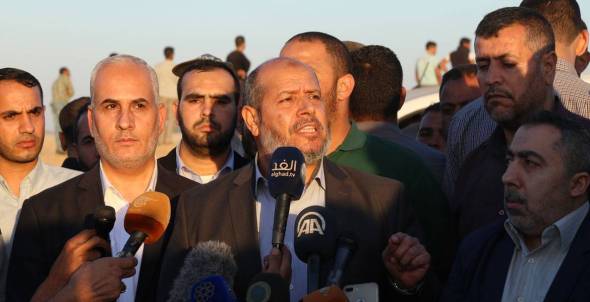 In a press conference held by Hamas during the Great March of Return and after the massacre of dozens of unarmed Palestinians, al-Hayya said that the Palestinian resistance factions are standing side by side the Palestinian people and have their full support.

He added, “the shedding of our people’s blood today stains the faces of those normalizing with the Israeli Occupation and bargaining on the Palestinian cause with shame.”

Al-Hayya called on Arab and Islamic uprisings to condemn the Israeli Occupation, describing the uprisings as “a natural response to this Israeli aggression against innocent Palestinian civilians.”

Al-Hayya stressed that Jerusalem is a red line and the transfer of the US embassy is an explicit attack on the history, rights and legitimacy of the Palestinian people.

“The American administration bears all the consequences of the implementation of this unjust decision, and this terrible crime will not pass unaccountable,” al-Hayya confirmed.

He reiterated his movement’s rejection of Donald Trump’s “Deal of the Century”, indicating that the movement will do everything it can to exterminate it, and that it will stand against all projects aiming to liquidate the Palestinian cause.

Unity in the field

The Hamas leader praised the unified work that took place during the Great March of Return and called on for the continuation of the peaceful protests until the rights of the Palestinians are fully retained.

“Our people who are living the bitterness of the Nakba will not remain silent and will not retreat until their ambitions and goals of returning back to their homeland are achieved”.

He concluded that the violent and lethal response of the Israeli Occupation to the peaceful Marches  confirms the Zionist occupation’s terrorist nature calling on the Arabs to stop the series of normalization and cut its ties with the Occupation.

Some good news for Gaza

This work by Julie Webb-Pullman is licensed under a Creative Commons Attribution-NonCommercial-NoDerivs 3.0 Unported License.
Based on a work at https://todayingaza.wordpress.com/.
Today In Gaza
Create a free website or blog at WordPress.com.